Anise is one of the most ancient aromatic and medicinal plants. For its medicinal properties it was known in ancient Rome and Greece, it is mentioned in the writings of Hippocrates and Avicenna. It is believed that cultivation of the plant began in the Eastern Mediterranean. According to other sources it happened in ancient Egypt. Ancient Romans first used anise seeds for recreational purposes and as an food additive. In the first century Rome anise was used in “mustaceus” - a popular spicy cake baked in bay leaves that was consumed after abundunt feasts to avoid indigestion. Pliny wrote that anise freshened breath and rejuvenated the body. Sale price of anise seeds was very high. Its value was comparable with spices such as fennel, coriander and caraway. Many cookbooks recommended the use of anise to flavor nut jam, honey and raisins. Combining it with the bay leaves, cinnamon, they sprinkled meat and cold dishes with it. It grows naturally in Lebanon, Greece, and Cyprus. For aromatic anise fruits people grow it in many other countries as well: Spain, Italy, Turkey, India, China, Mexico, Chile, USA, and Russia. It is cultivated in Moldova, Ukraine, countries of Central Asia and the Northern Caucasus. Another name of the plant is Hanus.

In cooking, both fresh leaves and fruits of anise are used. Anise essential oils and anise liqueurs are also used in culinary. Fresh leaves are used in salads and side dishes, as well as in the preparation of fine nut jam. Seeds and essential oil are added to cakes, cookies, cakes, pancakes, muffins, used for cooking of milk dishes (milk and fruit soups). Also they put it in porridge, sweet rice dishes, puddings, fruit salads, creams and cakes. It gives a peculiar taste to vegetables - beets, red cabbage, cucumbers and carrots, as well as to fruit compote, especially the ones made of apples, plums and pears. Anise is added to dishes of meat, fish, soups and stews. Anise gives the fish a pronounced spicy flavor and improves its taste and thanks to the strong antioxidant properties prevents "rusting". Anise seeds have sugary-spicy flavor that can "clog" other odors. Therefore, this spice is used mostly for flavoring fish and marine smell of iodine. To do this anise seeds are introduced to a dish temporarily (in gauze bags), and then removed or water in which the dish was cooked is poured out along with anise seeds. Anise fruits are normally included in the Mix of spices added to the dough for gingerbread. In many countries anise fruits are used in the manufacturing of anise liqueurs and vodka. In Austria and Germany, people like anise bread, sprinkled with anise fruits.

Presence of essential oils in anise makes it a great antiseptic and expectorant which enables to successfully use it to treat coughs, bronchitis, whooping cough, catarrh of the upper respiratory tract, as well as laryngitis and tracheitis. Anise fruits are used in pharmaceutical industry to prepare infusions, oils, syrups, anise drops of ammonia. Anise improves the taste of many drugs, dentifrices. Infusion from seeds increases the amount of milk in nursing mothers. A mixture of mashed fruit with egg white treats burns. To treat skin diseases roots are used and for scurvy anise oil is used.

Fruits of anise contain 2-3% of essential oils which also contain anethole (80-90%), methyl chavicol (10%). These ingridients give typical flavor of anise. Additionally, fruits contain 4-23% of fatty oil, 18% of proteins, 3-5% sugar, some acids and other useful substances. 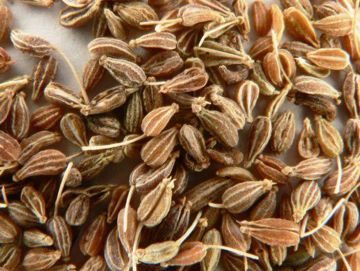